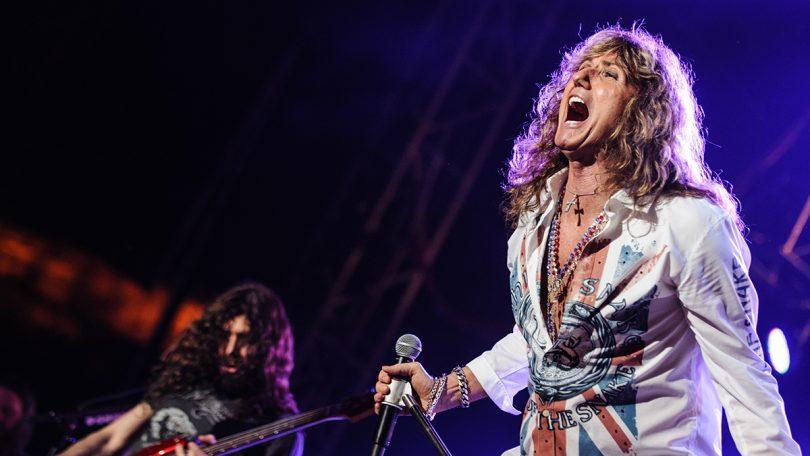 WHITESNAKE has pushed back the projected release date of its new album, “Flesh & Blood”, to next year. The band’s record label, Frontiers Music Srl, issued a statement earlier today blaming the delay on “technical issues.”

“It is with great disappointment that, following technical issues whilst mixing the new ‘Flesh & Blood’ album, WHITESNAKE and Frontiers have mutually agreed to delay the album release until early 2019. The release of the new studio record is to coincide with the WHITESNAKE ‘Flesh & Blood’ world tour. WHITESNAKE would like to express their sincere regrets to our fans all over the world for any and all disappointment and promise the album and tour will be worth waiting for.” the statement reads.

Frontman David Coverdale recently told SiriusXM‘s “Trunk Nation” that “Flesh & Blood” will “be the best WHITESNAKE album. I know that’s clichéd stuff, but I know what I’m talking about. I should do after almost 50 years,” he explained.

According to Coverdale, the new disc “has all the necessary WHITESNAKE elements that I need to call it WHITESNAKE, but with a vibrant, fresh coat of paint.” The record will mark the first time he has written with WHITESNAKE guitarists Reb Beach and Joel Hoekstra. “The longest-standing member of WHITESNAKE, Reb Beach, [he and I had] never written together until this project,” he said. “So it’s a family affair. It really is cool. I’m very excited for people to hear it.”

Coverdale revealed that recording sessions for the new WHITESNAKE album were halted while he recovered from an illness last year. “I got that horrible H3 flu, which took me out for, I think, about six weeks before I started to feel like myself again,” he said. “It was horrifying. It was that strain of flu that the anti-flu vaccination didn’t cover. It was just an evil, evil, evil strain of flu.”

WHITESNAKE filmed a music video for a new song called “Shut Up & Kiss Me” on March 10. “It’s a kick-ass song; you’re gonna love it,” Coverdale told “Trunk Nation”. “But there’s gonna some real fun elements paying respect and nod to WHITESNAKE‘s past, but certainly not as dark and as gritty as [WHITESNAKE‘s] ‘Burn’ video [from ‘The Purple Album’].”

WHITESNAKE will embark on the “Juke Box Heroes Tour” this summer with FOREIGNERand Jason Bonham.

WHITESNAKE‘s latest studio disc, 2015’s “The Purple Album”, was billed as “a re-imagination of classic songs from Coverdale’s time as the lead singer for DEEP PURPLE‘s Mark III and Mark IV studio albums.” Coverdale was DEEP PURPLE‘s frontman from late 1973 to early 1976 and sang on the albums “Burn”, “Stormbringer” and “Come Taste The Band”.