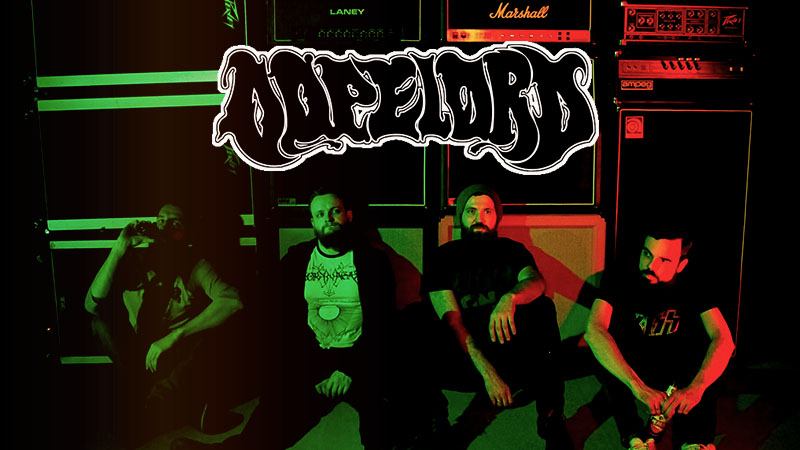 Polish doom band DOPELORD is currently on “When All Goes South” tour, during which they will visit Belgrade on February 26th for the first time. About their album “Children of the Haze”, stoner/doom scene, and few other stuff we had a chance to talk with Piotrek Zin, bassist and vocal of Dopelord.

In my opinion, European stoner/doom scene is at it’s peak over last couple of years. Here, in Serbia, the fan base of this genre is growing every day, and we are hungry for more shows like yours. What does the scene look like from your point of view?
Piotrek: Yeah, it seems like it. When we started, there was almost no people interested in this kind of music in our home country. 20 people attending shows and so on. It changed over those few years for sure. To me it’s just Poland is always 3-4 years behind the western world. In regards to everything really. Be it music, fashion, whatever. Maybe that’s Serbia’s case as well, I don’t know.

Can you tell us more about Dopelord’s first years? How did you get together? What was it like in the beginning?
Piotrek: We were in different bands, that shared members. We started Dopelord, those other bands died, that’s it. We were very excited at the beginning. Beginnings are always exciting, I guess. You’re amazed by the sound itself, low-end, fuzz. You think that you can turn anything into a song. Hitting open strings for ten minutes – that’s beginnings.

Which bands had most influence on your affection towards this kind of music?
Piotrek: Many different bands. We always have to answer this question. Most recently we all got hooked up on this great proto-doom band, Sir Snake. Check them out, they were awesome.

Are there some bands whose time is yet to come, that you would like to recommend to us?
Piotrek: I’m not really up to date with all the new bands out there. I always recommend our good friends who play terrific music: Major Kong, Weedpecker, Belzebong, Spaceslug. There’s no way you can leave disappointed with those.

I simply can’t stop listening to “Children of the Haze” album. It came out more than year ago, but it still amazes me every time I play it. What do you think about it now, year later?
Piotrek: I’m still pretty OK with it. It doesn’t bother me. And I’m more than happy with it’s reception.

At the same time I wonder, is there some new material that you are currently working on? Maybe new album on horizon?
Piotrek: Yes, new album is always on the horizon somewhere. We work on new stuff, we got some new tracks, many ideas for tracks. We just need enough time to put it all together now. It’ll happen, hopefully at the end of this year.

I fell in love with stoner/doom music over the last year or so, and “Reptile Sun” is definitely one of my favorite songs! It is so addictive , and a bit faster and more dynamic then rest of the songs from album. Will there be more songs like it in the future, or will you stay with “low and slow”?
Piotrek: It’s hard to say. We don’t work this way: “Ok, we got three slow tunes, now we need something faster”. If a track is good enough it goes on the album. Doesn’t matter if it’s faster, slower. I like versatile albums myself, so I hope for it, but if it won’t come up that way – so be it.

Recently, we made annual lists for our magazine, that contained best albums in 2017. and “Children of the Haze” took 5th place on mine. Since I am still under impression of those lists, so I must ask you what are the best albums that you have heard in last year?
Piotrek: I would go with new albums by: Major Kong, THAW, The Stubs, All Them Witches, Elder, Kadavar, Electric Wizard, King Gizzard & The Lizard Wizard (“Flying Microtonal Banana” FTW), Kairon: IRSE!, Mastodon (“Cold Dark Place”).

With “When All Goes South” tour you are mostly going around Balkans. Have you ever had any show somewhere around here, or is this your first trip south?
Piotrek: We never played around Balkans. The closest we’ve been to you guys would be Athens, Greece.

What comes after this tour for Dopelord?
Piotrek: Another tour. Some dates already have been announced. We will play some great fests this year, including Desertfest London and Berlin. This year is gonna be very busy for us. And that’s good.